The World’s Most Famous Trophies, and EDCO’s Equivalents 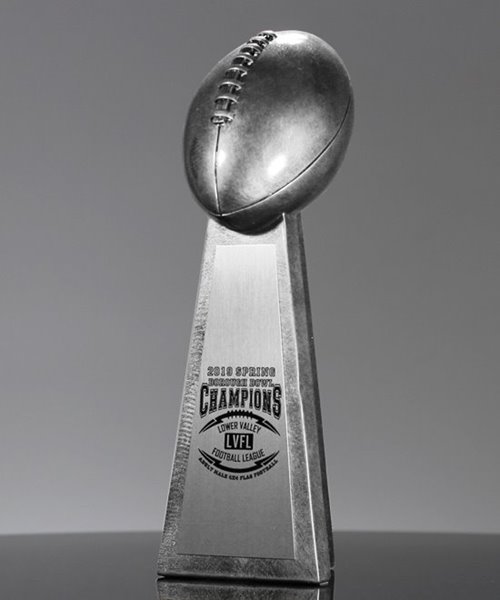 Created in a variety of shapes and sizes, many sporting events and leagues have unique trophies for the winning team or players. Certain awards are produced each year, while others use the same trophy perpetually. Most of these trophies are instantaneously recognizable even to people outside of the sport. Depending on the material, design, and production costs, each trophy has a different value as well.

If you are looking for an award that communicates the same level of excellence as one of the famous trophies below—such as the Stanley Cup or the Lombardi Trophy—then you have come to the right place. EDCO offers the widest range of quality employee recognition and athletic achievement awards in the United States.

Let’s look at some of the most famous trophies in the world, what makes them special, and how EDCO can get your business or team something similar: 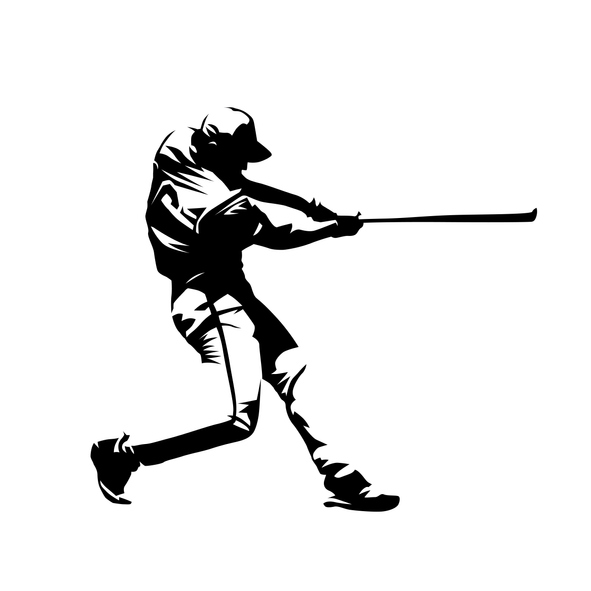 The Commissioner’s Trophy is the only one out of the four major sport trophies not named after a person. It stands roughly two feet tall not including the base, weighs close to 30 lbs, and features a sterling silver finish.

The 30 flags on the trophy represent the 30 teams across Major League Baseball, though only 23 teams total have won the trophy in its history. Balfour Jewelers of Massachusetts designed the original trophy in 1967, with Tiffany & Co. introducing the modern redesign at the turn of the century.

The Commissioner’s Trophy gives its winners a sense of pride through the recognition that their team has risen above all others represented on the trophy over the course of the baseball season. EDCO offers many similar awards that can instill these same feelings in top performing employees, such as the Team Perspective Crystal Award. 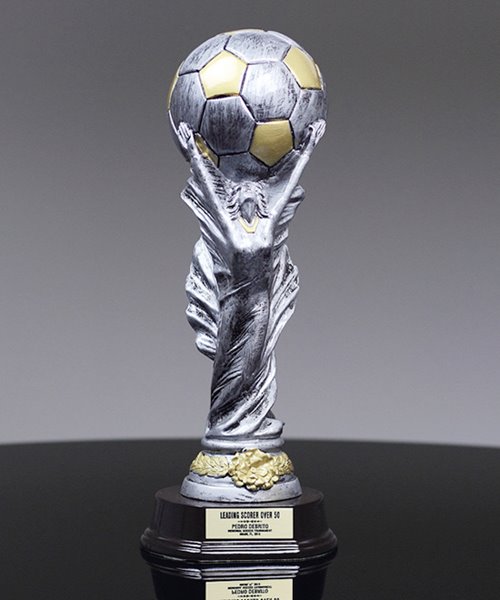 Originally called the Jules Rimet Trophy, the current FIFA World Cup was first awarded in 1974. The new trophy came to be after Brazil won the original for the third time in a row in 1970, as its creator—Jules Rimet himself—had declared the first country to do so would get to keep it forever.

Italian artist Silvio Gazzaniga won the contest to design the new trophy out of 53 submissions from seven different countries. The trophy stands just over a foot tall, weighs roughly 13.5 lbs, and features 18 carat gold in its composition. A total of 12 countries have won the trophy and had their names engraved on the base as of 2018.

Though getting your hands on an actual FIFA World Cup Trophy may prove difficult, EDCO happily offers a similar design for any soccer enthusiast or youth coach. Our World Cup Replica Trophies also feature free engraving services for any and all champions. 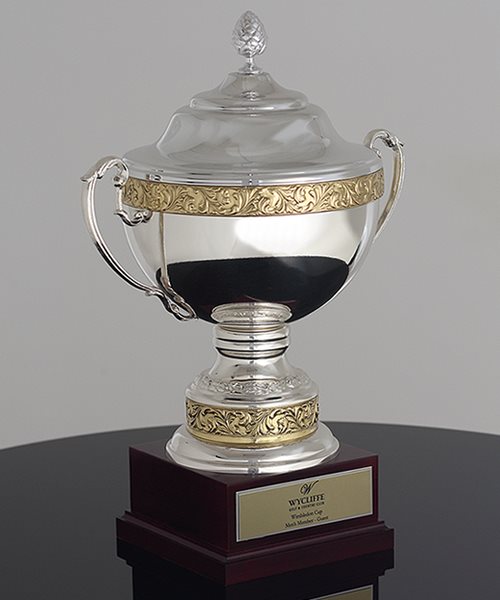 The Gentlemen’s Singles Trophy is perhaps the most mysterious on this list. First appearing in 1887, the trophy stands a foot and a half high, but even the winners only receive a replica of about ¾’s the original size. Even more curious is the pineapple that sits at the top of the perpetual trophy, which some theorize to be a 17th century status symbol, though the true meaning has been lost to time.

In 2009, a plinth was added to the base of the trophy because no more room was available for the winners’ names. The black plinth features a silver band that will ideally feature the names of engraved champions for decades to come.

EDCO offers a similarly shaped award in the form of the Classic Championship Cup that is perfect for recognizing a truly outstanding achievement in any arena, in or out of the workplace. Individuals and teams of employees alike will appreciate the prominence and presence of this trophy, which is actually a bit larger than the Gentlemen’s Singles Trophy itself. 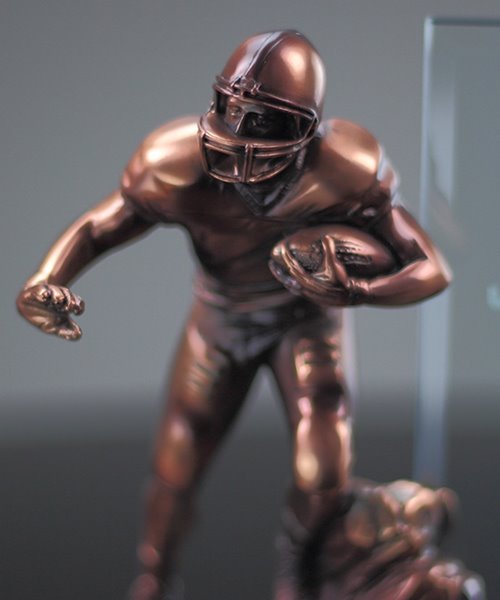 The Heisman Trophy is perhaps the most iconic individual award in American sports. First awarded in 1935 to Chicago Maroons running back Jay Berwanger, the trophy was originally known as the “Downtown Athletic Club Trophy” before adopting the Heisman name the following year. In 2020, a wide receiver won the award for the first time in three decades.

Though it is named the Heisman Trophy, the award is actually modeled off of former New York University running back Ed Smith—not the more famously-known John Heisman. The trophy includes a cast bronze finish, weighs roughly 45 lbs, and stands just over a foot tall. As of 1999, recipients are required to sign a waiver saying they will not sell the trophy.

While bronze is typically associated with third place, it remains a quality material for composing awards and recognizing the achievements of athletes and employees alike. EDCO offers a Football Glass Plaque that features a Heisman-esque figure throwing a stiff arm, but for a more corporate bronze award, the Circle Teamwork Award is an excellent choice. 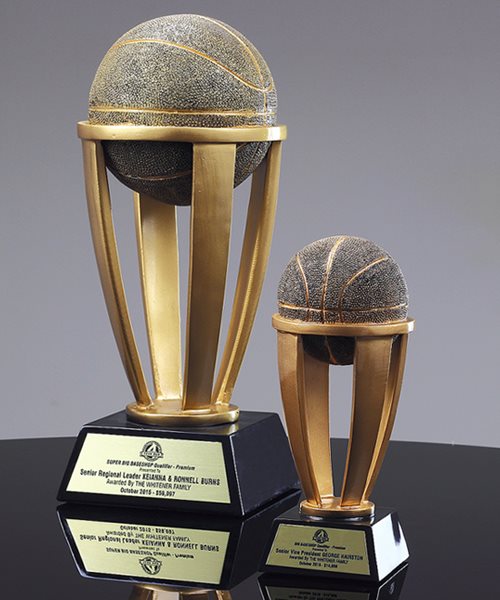 Originally known as the NBA Finals Trophy, the Larry O’Brien Championship Trophy has gone to the NBA Champion every year since 1947. The award originally featured a cup design, but the more commonly-recognized modern trophy took its place in 1977.

The trophy weighs about 15.5 lbs, stands two feet tall, and prominently features sterling silver and vermeil material with a 24 karat gold overlay. The trophy’s figure depicts a life-size basketball falling into a net.

If you are looking for a similarly-shaped award, EDCO offers a Tower Basketball Trophy that features the same style of a basketball cascading into a golden net. For a more classic shape that offers great versatility across companies and sports teams alike, EDCO also offers a Classic Americana Cup in three different sizes. 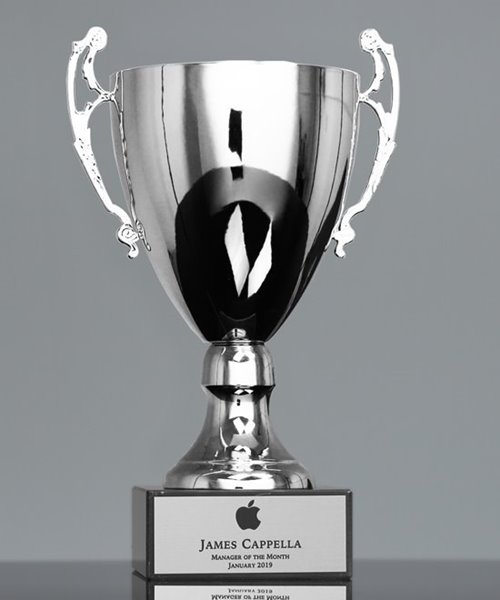 Arguably the most iconic of all American trophies, The Stanley Cup is the only award out of the four major U.S. sport trophies not to receive an annual new creation. Instead, it travels to the winning team’s city and receives a fresh engraving of the new champions each year.

The perpetual award stands just under three feet tall, weighs surprisingly ten pounds less than the Heisman Trophy, and features a silver and nickel alloy replica of the original Dominion Hockey Challenge Cup bowl at its apex. As of 2017, the award displays the engravings of over three thousand different names.

Though the brilliance of the Stanley Cup is nearly impossible to reproduce, EDCO still offers plenty of striking silver awards that will offer a sense of pride to recipients for their efforts. The Fairway Silver Cup is an excellent trophy for champions on the ice or in the office—featuring a highly polished finish and black marble base. 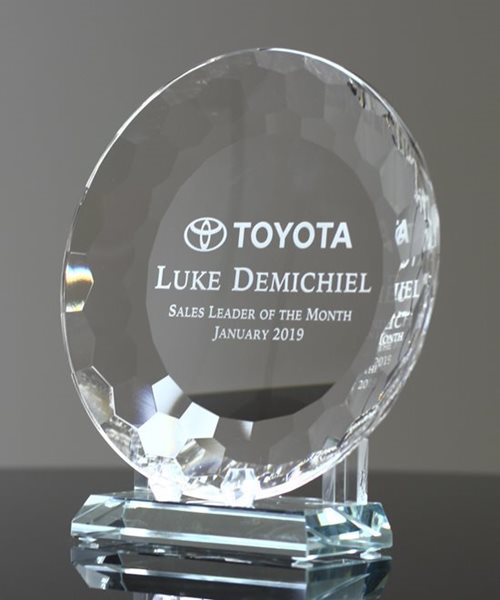 The Venus Rosewater Dish is perhaps the more iconic of the two Wimbledon trophies presented annually. The perpetual award was modeled off a pewter rosewater dish in 1864 that still remains in the Louvre to this day.

The dish has a circumference of just under 60 inches and includes gilded sterling silver material displaying mystic figures and designs throughout. The names of champions from the first 73 years of the award’s history display on the inside of the dish, with the remaining winners from 1958 onwards inscribed on the outside.

Though EDCO unfortunately cannot provide 19th century artifacts to its customers, we do offer trophy plates, silver plaques, and art glass awards that include various similarities to the Venus Rosewater Dish.

Named after the renowned Green Bay Packers coach Vince Lombardi, the Lombardi Trophy originated as merely a sketch on a cocktail napkin during the NFL commissioner’s lunch break. It was originally known as the World Professional Football Championship until Lombardi’s death four years after its inception, upon which it was renamed in Lombardi’s honor.

The trophy stands a couple of inches short of two feet tall, weighs shockingly light at just seven lbs, and features a thorough composition of sterling silver. Though teams originally received the trophy in the locker room following the big game, the owner of the winning team has since received the trophy on the field immediately following the contest since 1996. The NFL commissions new Lombardi trophies every year so that the winning teams may maintain permanent possessions of their award.

With a sleek and simple design, the Lombardi Trophy remains an icon among all awards. As such, EDCO proudly offers many similar trophies in a variety of materials and sizes, such as the Football Champion Silverstone Award.

Whether you are looking for an award with similarities to the most famous trophies in the world or a unique design perfect for personalization, EDCO's suite of award offerings has exactly what you need. Coaches, managers, or business owners seeking a recognition award for their teams can contact us today or call 800-377-8646 to get started on an order.

What's the most valuable trophy in the world?

What are the best trophies of all time?

According to Fox, the best trophies of all time are:

What is the oldest trophy in the world?

The Carlisle Bell is a British flat horse race, dating back to 1599 is said to have the oldest trophy, at 400+ years old.