The ideal employee would show up to work every day, right on time, do all of his or her work (and then some), and never need anything as an incentive to work extra hard.  It would just be in their very nature.  Although this may sound appealing, we don’t live in a perfect world, and we have to make do with the best of the imperfect world that we are given. Providing a little extra something such as performance recognition awards to motivate your employees to work harder may sound unnecessary to the employer, but it has been proven time and time again to be an incredibly effective way to get a little bit more productivity out of your employees and to even create better teamwork in collective projects.  Teamwork can either strengthen organizational goals or it can cripple it.  Teamwork has to be a part of the culture and it has to be rewarded when it is done properly.

Many people would argue that teamwork is the cornerstone of a successful business. Even the most productive and useful of employees wouldn’t be able to get much done if everyone was only working independently.  With globalization occurring in most firms and increased use of teleconferences and working from home, employees are working with others that they may have never even met before. Awarding teamwork and accomplishments is an ideal way to further strengthen the team’s commitment to the mission of the company; especially in these situations.  Collaboration on work assignments and projects is normally strongly advised because of how quickly things can get accomplished, and in a lot of cases it is actually necessary to get done what you’re trying to do.

With that said, it shouldn’t be much of a surprise to say that you should want to foster a sense of teamwork whenever and however possible; it’s critical to organizational success. Not only would it make your business operations run much smoother and more efficiently, but it also would give your employees appreciation, goal setting and greater work relationships with both coworkers and management.  A lot of these areas are almost completely absent when working separately and not being able to share ideas or approach management.

Using prizes and awards as an incentive for working together is an excellent way to build both a sense of teamwork and community, as well as streamlining the operations of your business.  Good inter-company competition when handled properly can also stimulate the efforts of each project. If you’re envisioning some large award that will just take up office space, this doesn’t have to be the case either; awards and trophies come in all shapes and sizes.

Recognizing team efforts in the corporate setting with a personalized award is in many cases, more than enough to show that you are grateful for them working as a team and providing more output than individually. It’s often time consuming to schedule out presentations and sit each and every team member down to provide feedback on a regular basis other than say, annually.  With an award you are accomplishing the physical connection of ownership as well as subconsciously instilling the words of praise and encouragement without ever having to say them.

Employers will frequently try to get more performance out of their employees by creating some sort of competition. This approach can have several drawbacks however if it is not managed properly.  Firstly, not everyone is a particularly competitive person, which means it may not be effective on them. Secondly, since there is a winner of a competition, you will inevitably have a loser too, and those that have lost the competition may begin resenting your way of creating more productivity.  How the competition is setup, what will be awarded and how it is managed is very important.

This is the beauty of using an award to foster a sense of teamwork for your employee however - nobody feels as though they have been cheated out of anything and those that didn’t get an award will feel inspired and motivated to work harder so that their efforts are noticed too.  If they don’t they are either a low performing employee, or there is not enough value tied to the incentives being offered.  You can also pair a nonmonetary gift (e.g. acrylic awards) with a monetary gift as well such as a gift certificate.

Another benefit of using awards over any other type of incentive for teamwork is the amount of money you’ll invest in it, or rather, the lack of it. Buying acrylic awards in jade, clear or black for example, will be a very low investment and has the potential to create better teamwork and performance than a monetary award by itself can.  Teamwork is a foundation of almost every organization today, collaborative efforts are needed and the relationships and productivity of these groups depends on how well it is managed and rewarded.  The fact that an award can be personalized shows more effort is being placed in the recognition and feedback versus just handing a gift card to an employee that is quickly forgotten about after being used.  There is more value and meaning behind an award, even if it costs less, as the price threshold of appreciation on a gift card is much higher. 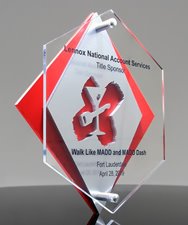 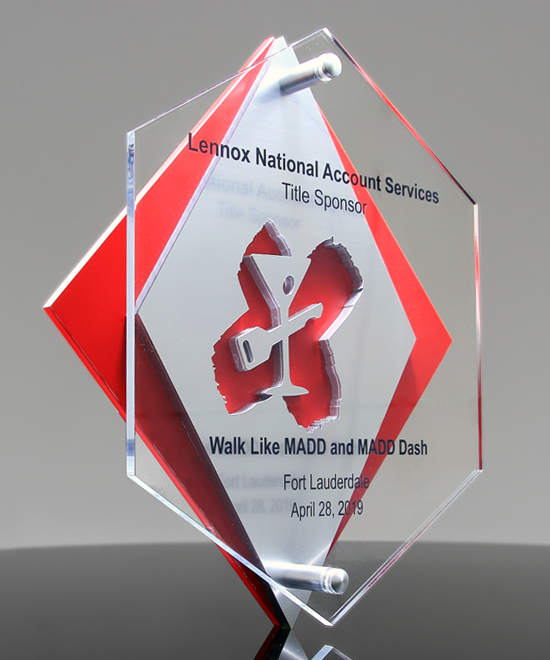 EDCO has expanded its lineup of custom acrylic awards with five new designs that incorporate customers’ own designs or corporate logos.

We have a lot of customers who want to design their own awards or have input in the design.   They bring us their design or logo and our skilled designers create a virtual sample before we start production on the actual award.

With full in-house capabilities, from award design to laser cutting, edging, beveling, engraving and color printing, EDCO can turn around orders in short order, often in as little as three days.

Delivering high-quality, memorable custom awards is where we really excel.

View our complete lineup of acrylic awards.   Most of our standard acrylic awards can be ordered online.  For custom awards or for assistance with your award, call 800-377-8646 to speak with one of our product advisers.